Stores dictate the image of this trendy neighbourhood. Chiado is located between Baixa and Bairro Alto and because it lies between two districts, it goes up hill. 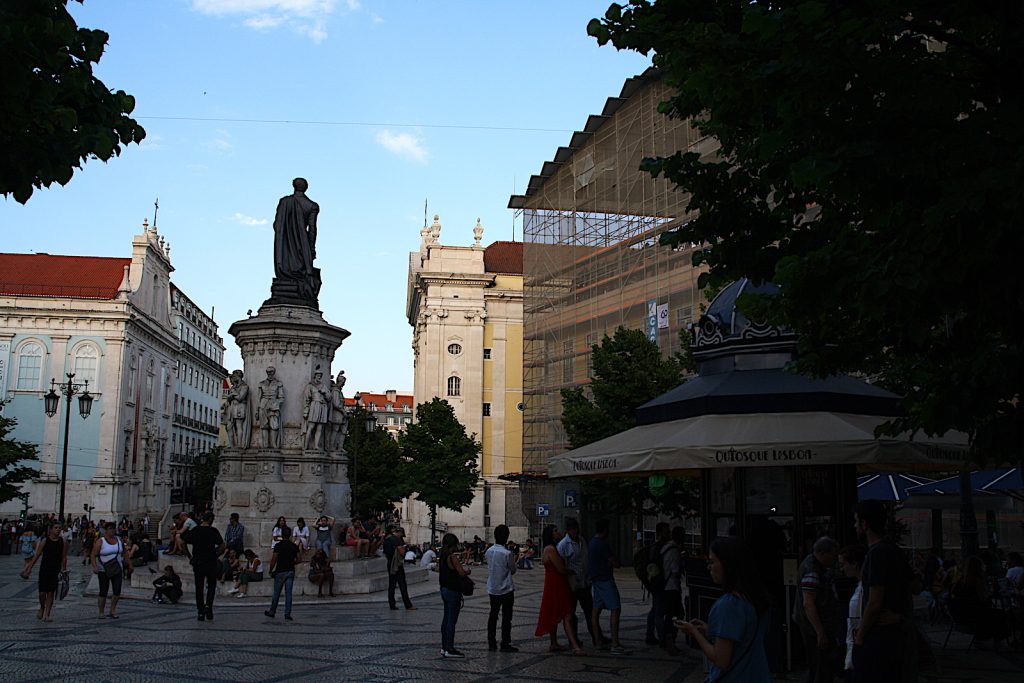 This district is wonderful to wander through, it offers a combination of modern and traditional shops. Most shops, cafes and restaurants are in the area of Rua do Carmo and Rua Garrett. In addition to the shops, the district also has many cultural aspects such as theaters and museums.


Fire in the Chiado

In 1988 Chiado was hit by a big fire in Rua do Carmo, which quickly spread to Rua Garrett. In total, 18 buildings were destroyed and more than 1600 firefighters were working hard to control the fire. This fire is regarded as the biggest disaster in Lisbon after the earthquake of 1755. 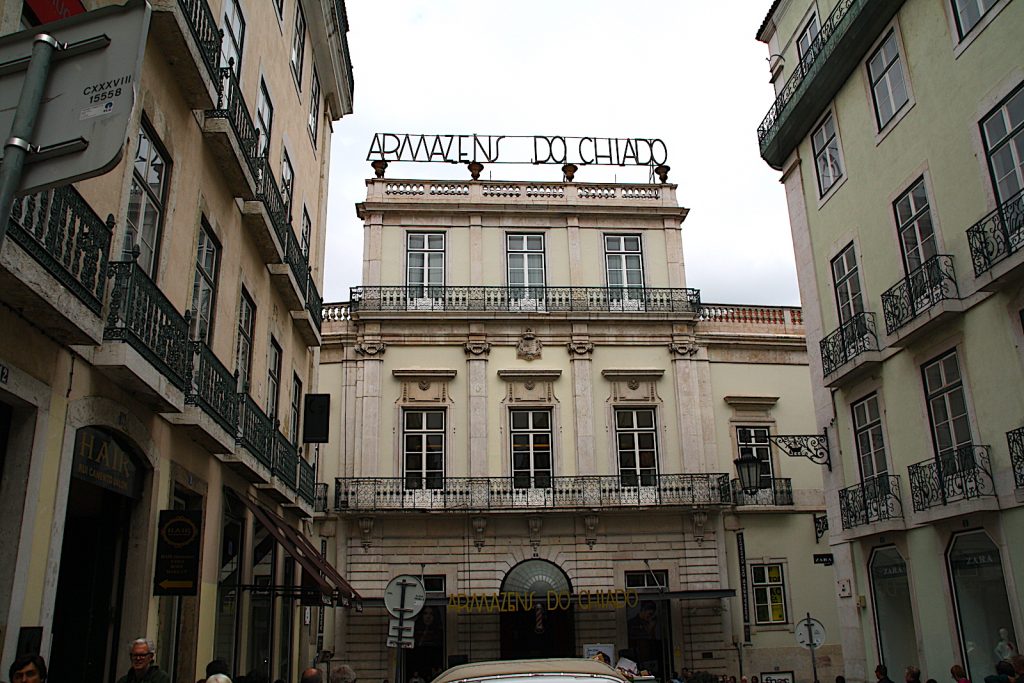 The rebuilding was completed in 1999. It included a shopping center, Armazéns do Chiado and the Baixa-Chiado metro station. From the outside the buildings have been restored to their old glory. 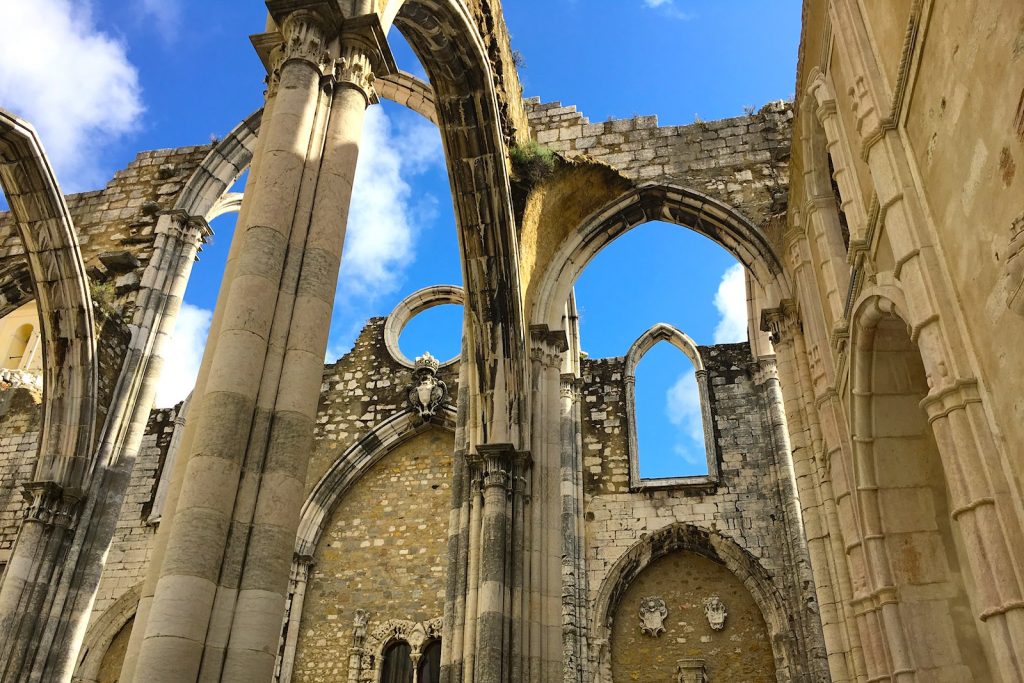 The monastery Convento da Ordem do Carmo, better known as Convento do Carmo was founded in 1389. The church was badly damaged during the 1755 earthquake. The ruins of the Gothic church are today the largest surviving evidence of the earthquake. It is a striking building that can be seen in many places. The building is now an archaeological museum and the headquarters of the Guarda Republicana.

More about Convento do Carmo » 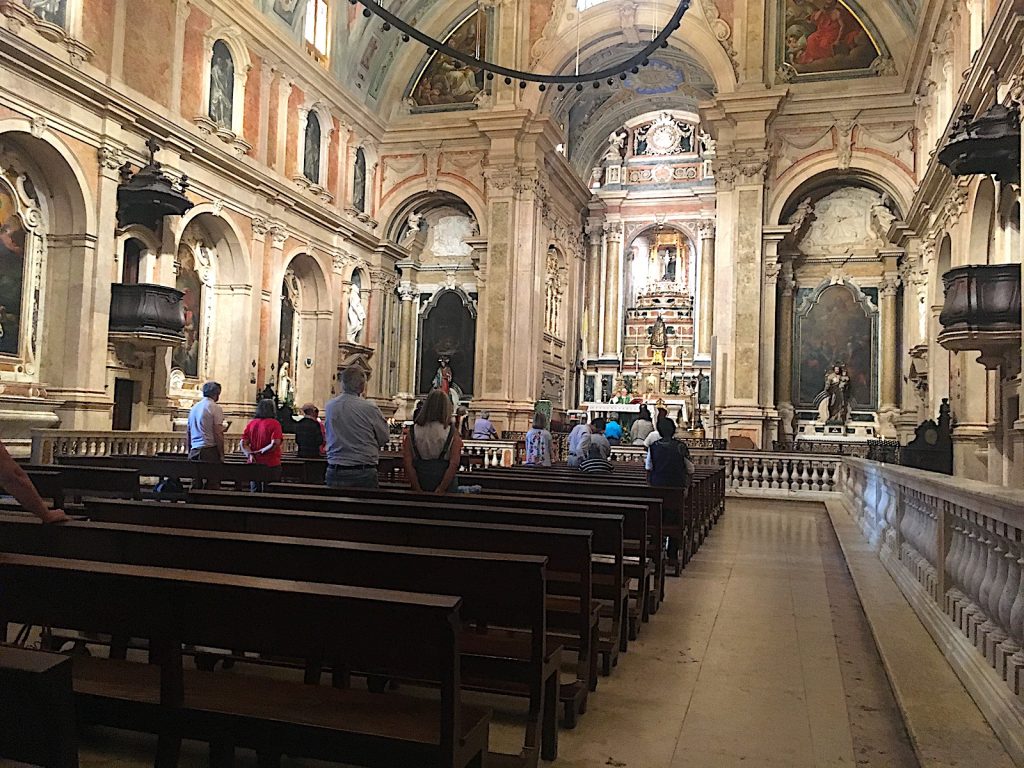 Igreja do Loreto is situated at the end of Rua Garrett. This church is dedicated to the worship of Senhora do Loreto, who was introduced in the 14th century by the Italians who came to Portugal.

More about Igreja do Loreto »

The church Igreja de Nossa Senhora da Encarnação was built in rocaille style in the 18th century, as can be seen in the lateral chapels. The church has a collection of images from the 18th century; particularly that of Nossa Senhora da Encarnação, made by sculptor Machado de Castro. The windows of the main chapel and the baptistery, made in the 1940s, were done by Joaquim Rebocho from the Algarve. 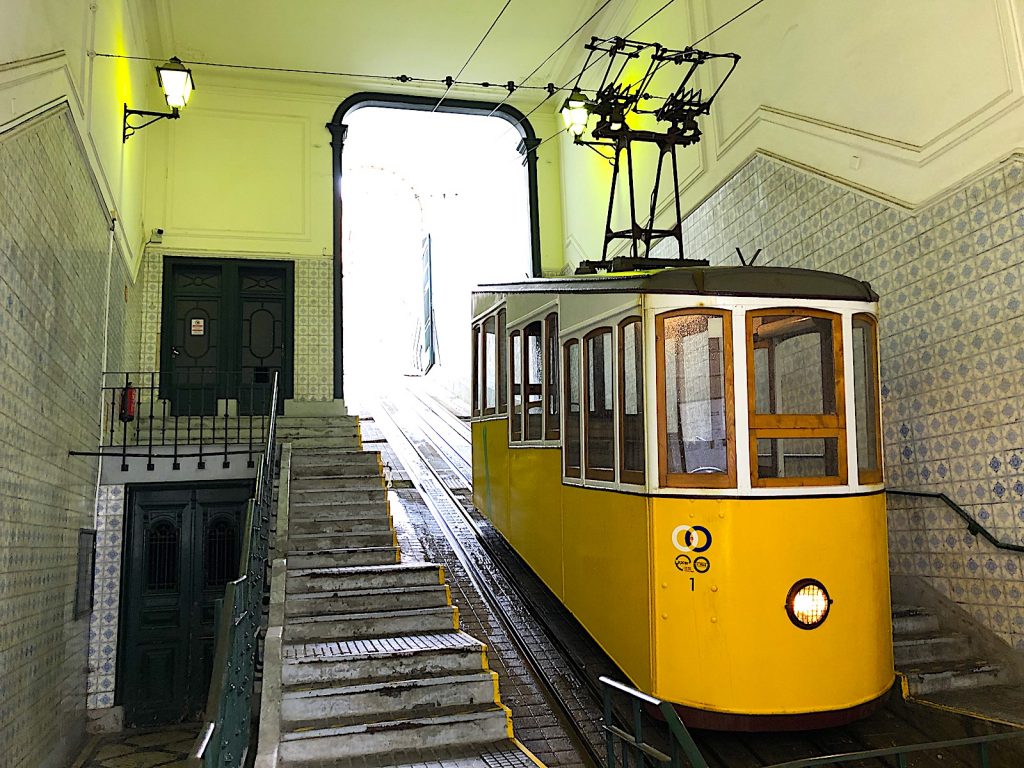 To get to the Chiado, Estrela or Bairro Alto in a quick way you can take the Elevador da Bica. This tram will bring you back to the upper city.

The facade of Igreja de São Roque looks boring, but does not tempt you to walk past it. Because the interior is spectacular. 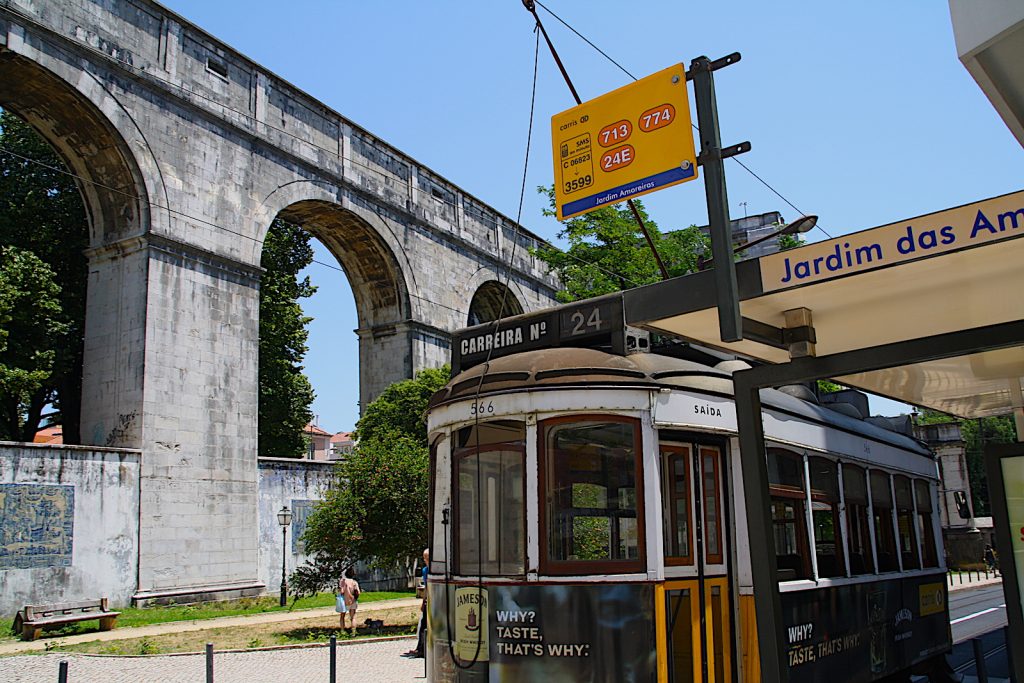 Since September 2018, elétrico 24 has been driving after 23 years of absence through the streets of Lisbon. The tram has a starting point near the Bairro Alto. 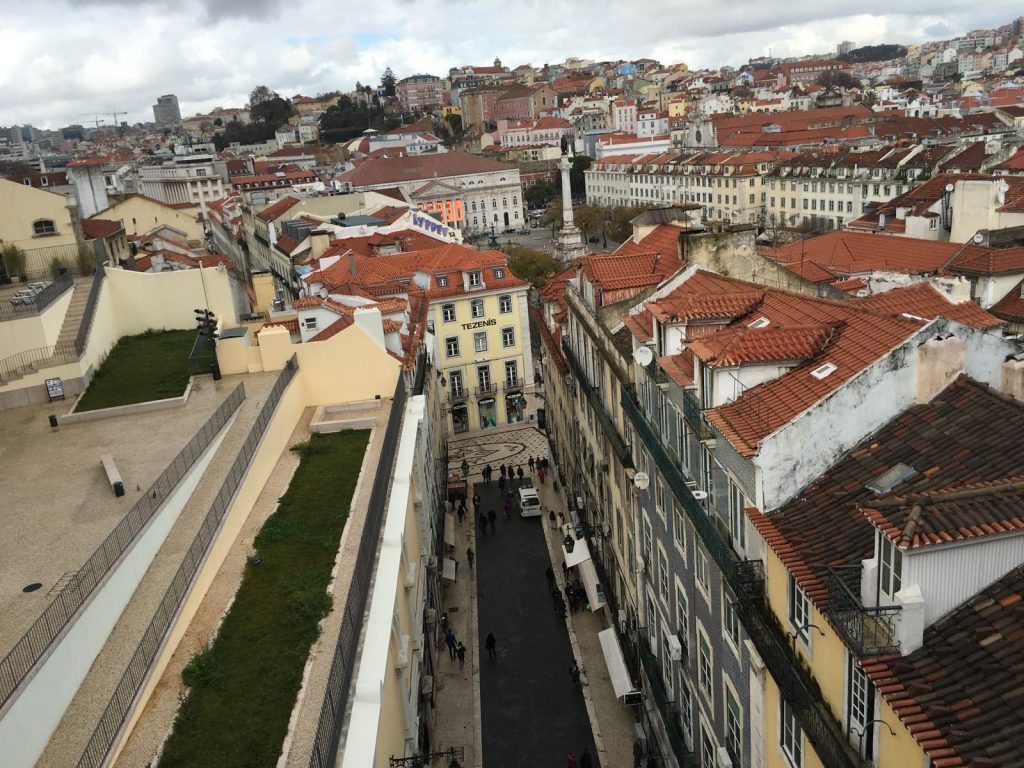 Rua do Carmo: the uphill shopping street that runs from Rossio (Baixa) to Rua Garrett (Chiado). In addition to shops, this street also offers cafes and restaurants and an ice cream shop: Santini Chiado.

More about Rua do Carmo » 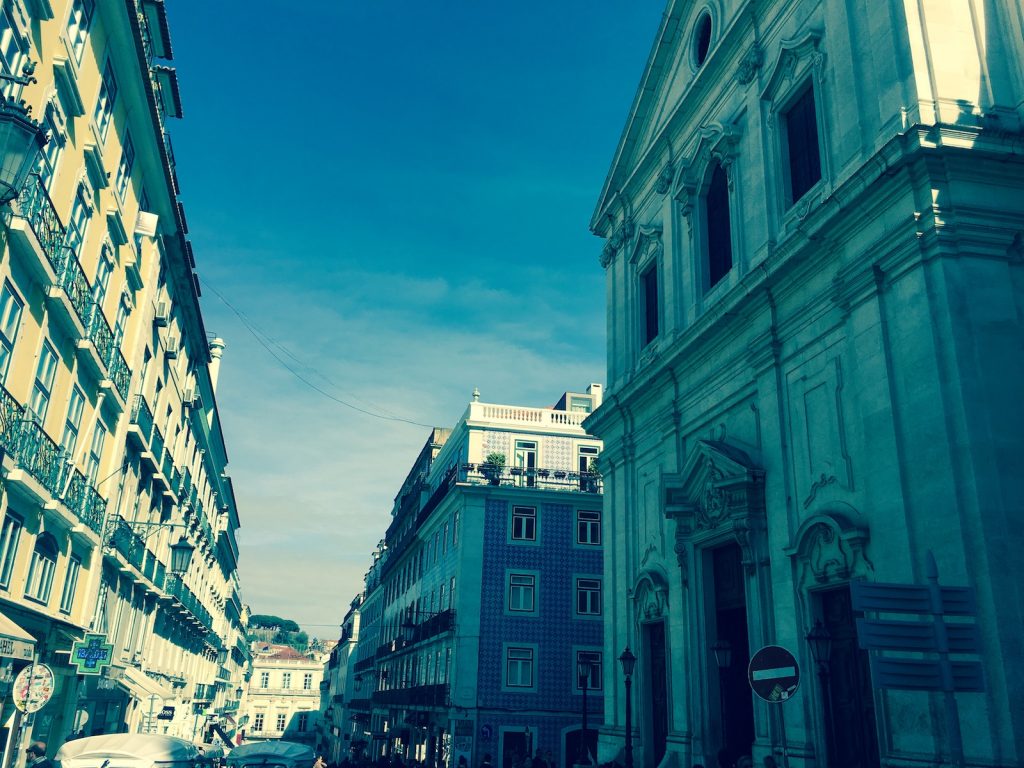 Rua Garrett connects the Largo do Chiado with Rua do Carmo. It is one of the most famous streets of Lisbon with a mix of traditional chic and modern shops. This street is also known for the Café A Brasileira. 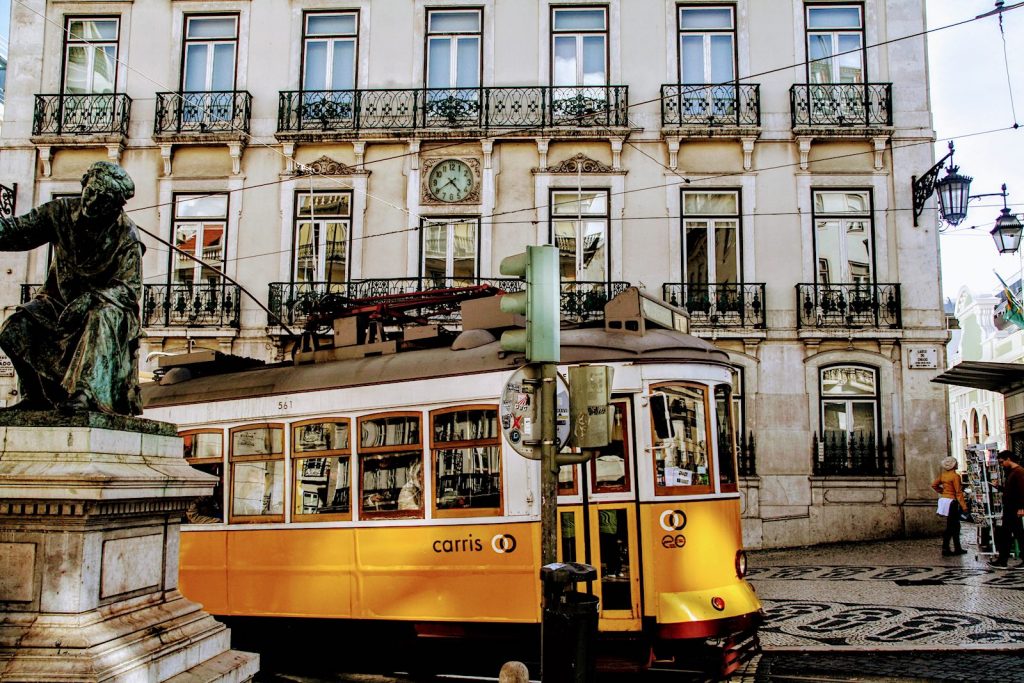 Largo do Chiado small square in front of Café A Brasileira with calçada (pavement of mosaic tiles) that create a pattern on the floor. In the center of the square is a statue of a sitting António Ribeiro, a monk who lived in the Chiado. 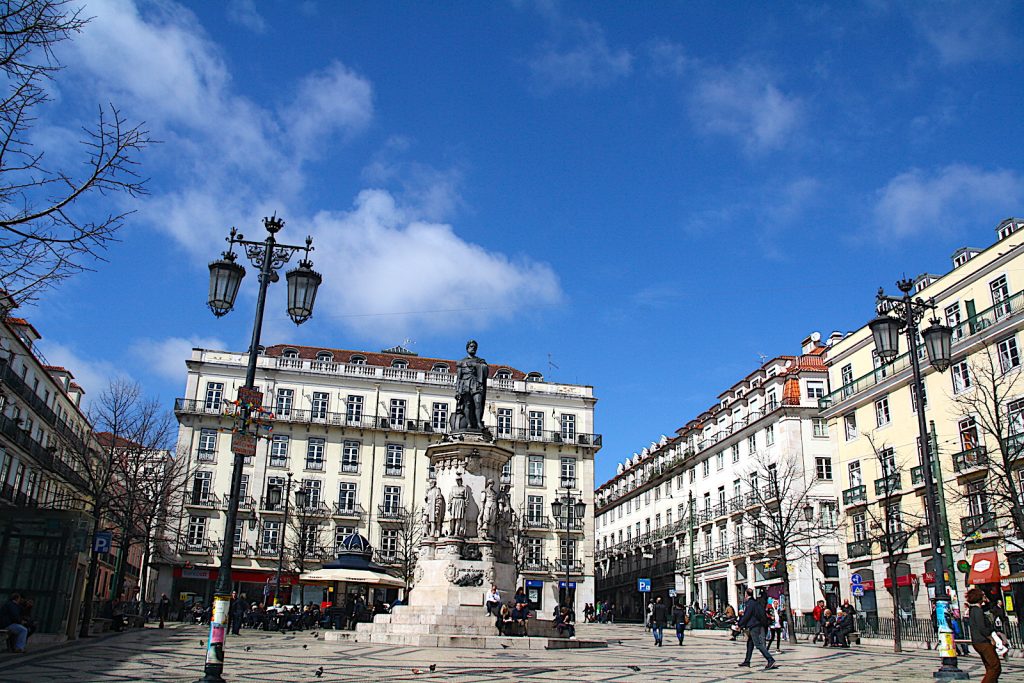 In the heart of the Chiado, this oval square, Praça Luís de Camões, is built on the spot where before the earthquake of 1755 a palace was completely destroyed. In the middle of the square, the statue of Luís de Camões was erected, a Portuguese writer from the 16th century. The square has calçada in beautiful patterns. In addition, the square is decorated with stone benches and ornate iron fences and gives access to the popular districts of Lisbon.The square is connected to Baixa-Chiado, Bairro Alto and it’s a comfortable 10-minute walk through Rua do Alecrim to Cais Sodré. It is also just a few away from the Ascensor da Bica. You can board Elétrico 28 here, if you like. 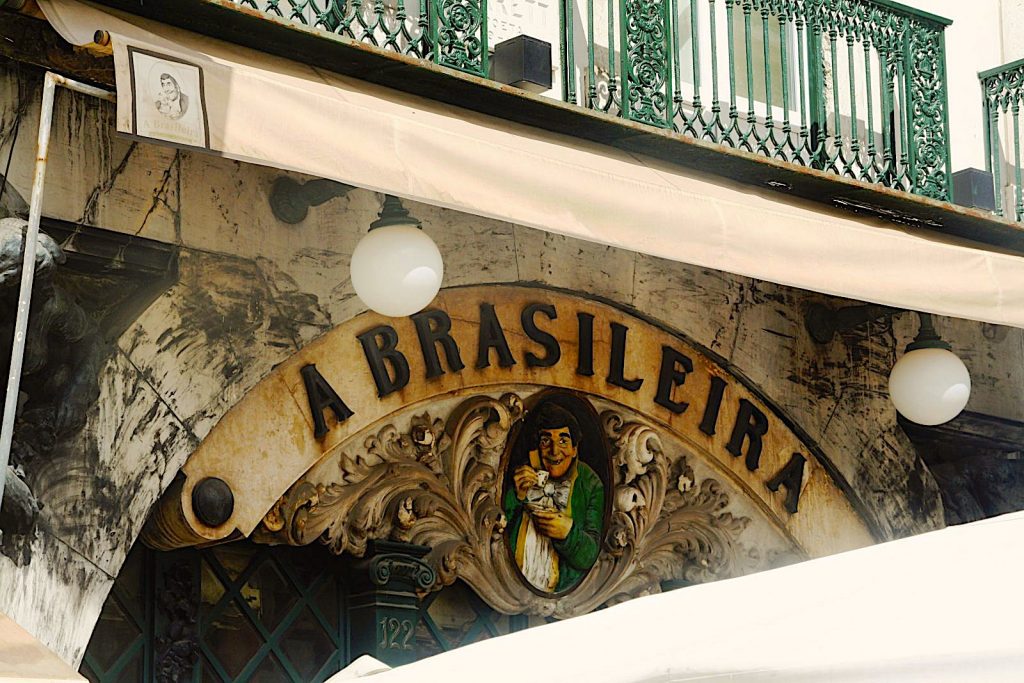 In the old days writers such as Fernando Pessoa and Eça de Queiroz came at Café A Brasileira for a bica. Nowadays crowds of tourists are falling over each other for a coffee or a Pastéis de nata. Want to take a picture with the writer Pessoa? Join the queue.

More about Café A Brasileira » 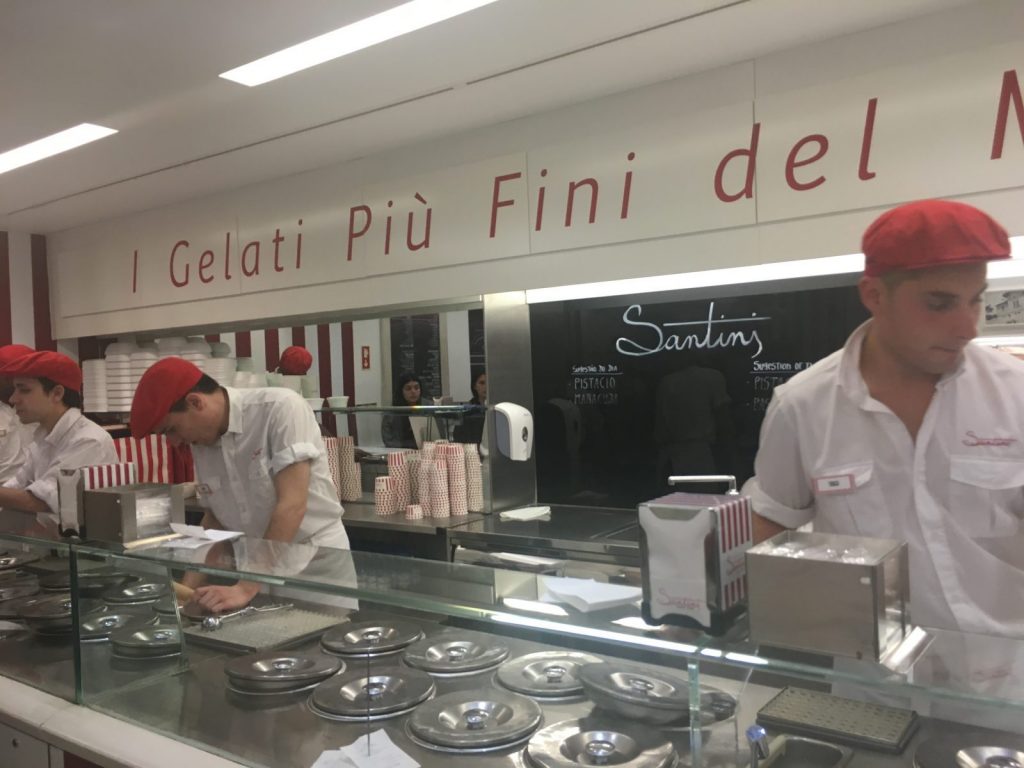 The best ice cream in the world, according to these ice cream makers. We tend to agree. Definitely worth trying for yourself. 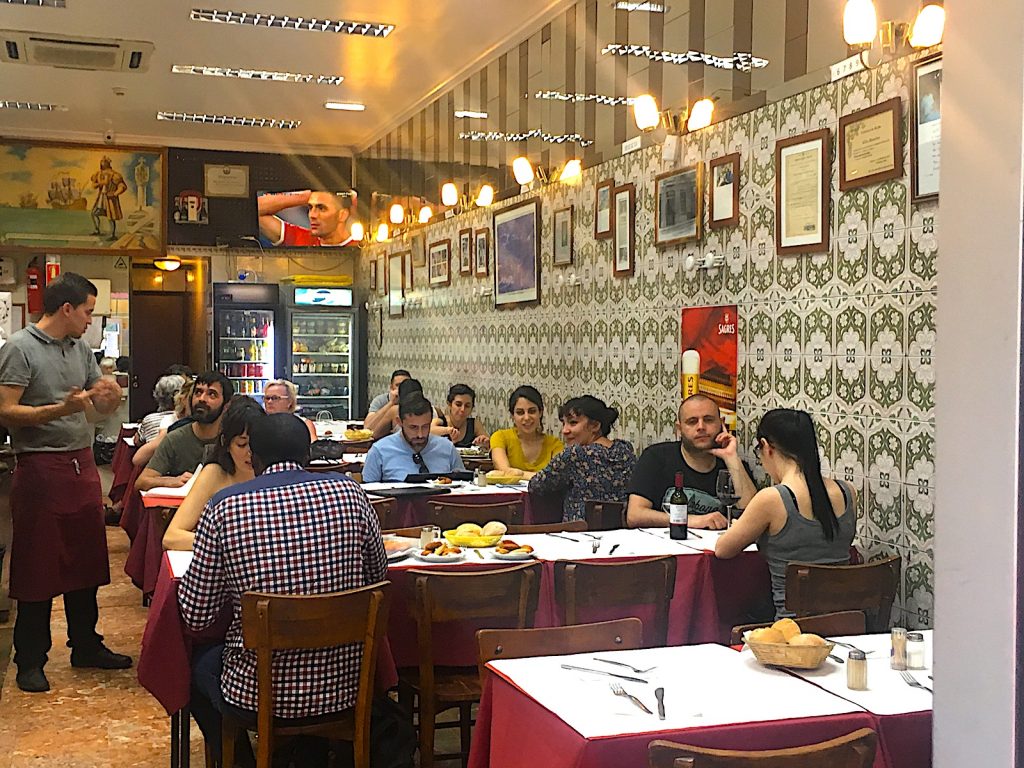 One of my favorite restaurants. Casa Da Índia (encarnação), is small, chaotic and always busy. You eat with the locals because you share a large table with them. The fish is fresh and they serve typical Portuguese cuisine, even though the name suggests otherwise. The service is very friendly and they work very hard to serve the overcrowded restaurant as well as possible. It is a low budget restaurant but with high quality food.Addresse: Rua do Loreto, Chiado 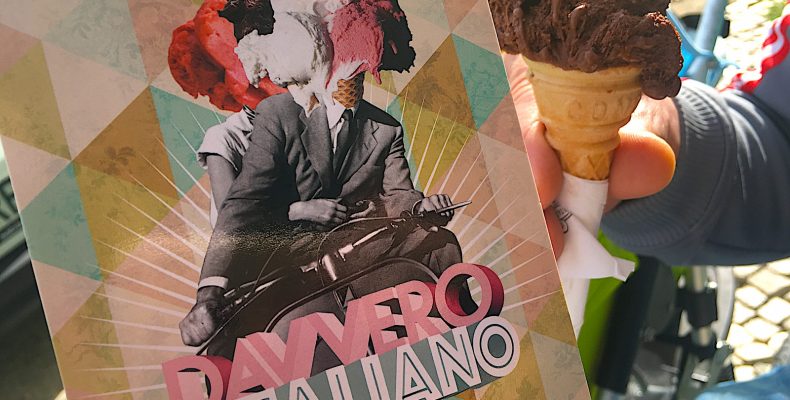 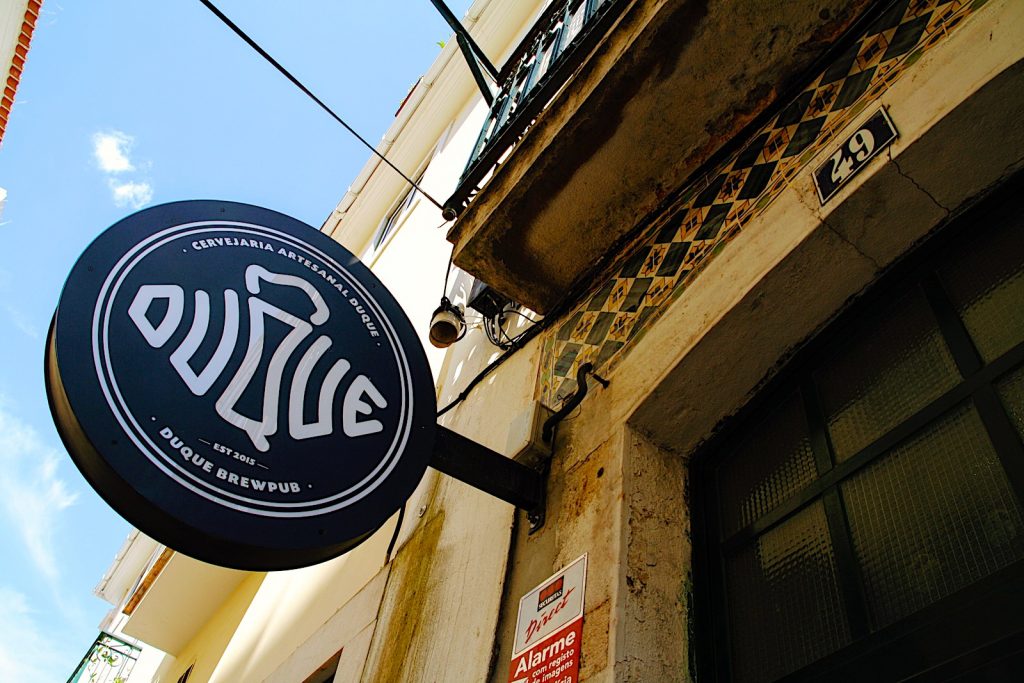 Portugal is of course best known for its excellent wines and all kinds of (often home-distilled) spirits. But since a few years the craft beer movement is slowly developing. A clear exponent of this is Duque Brewpub. 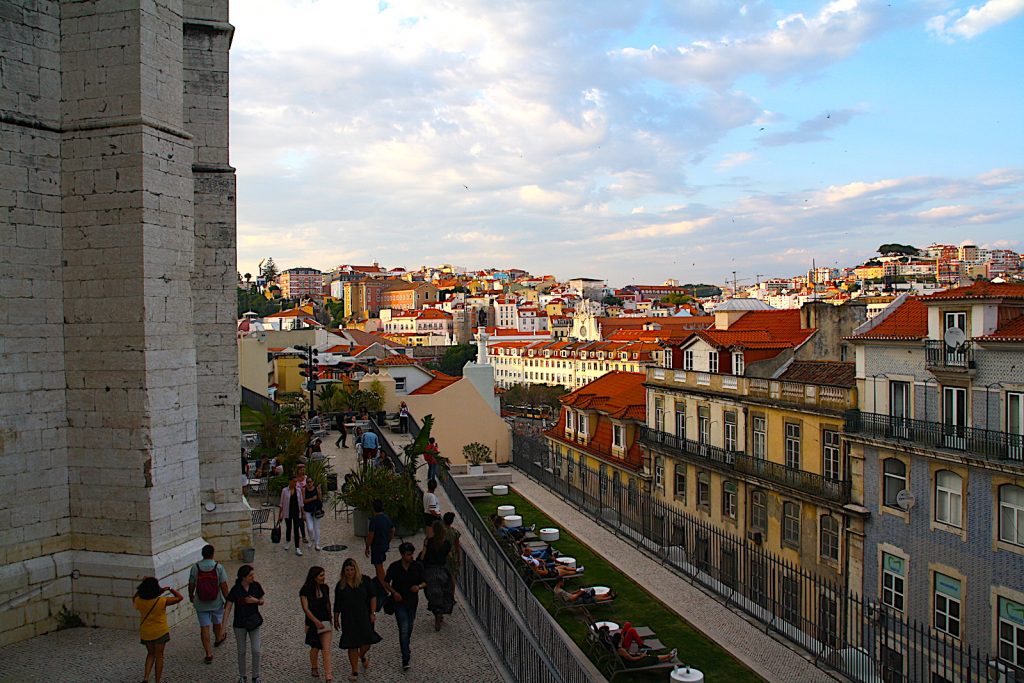 Drink, view, relaxed atmosphere, a visit to Topo Chiado we could not let go of. Have a drink among the historic buildings. 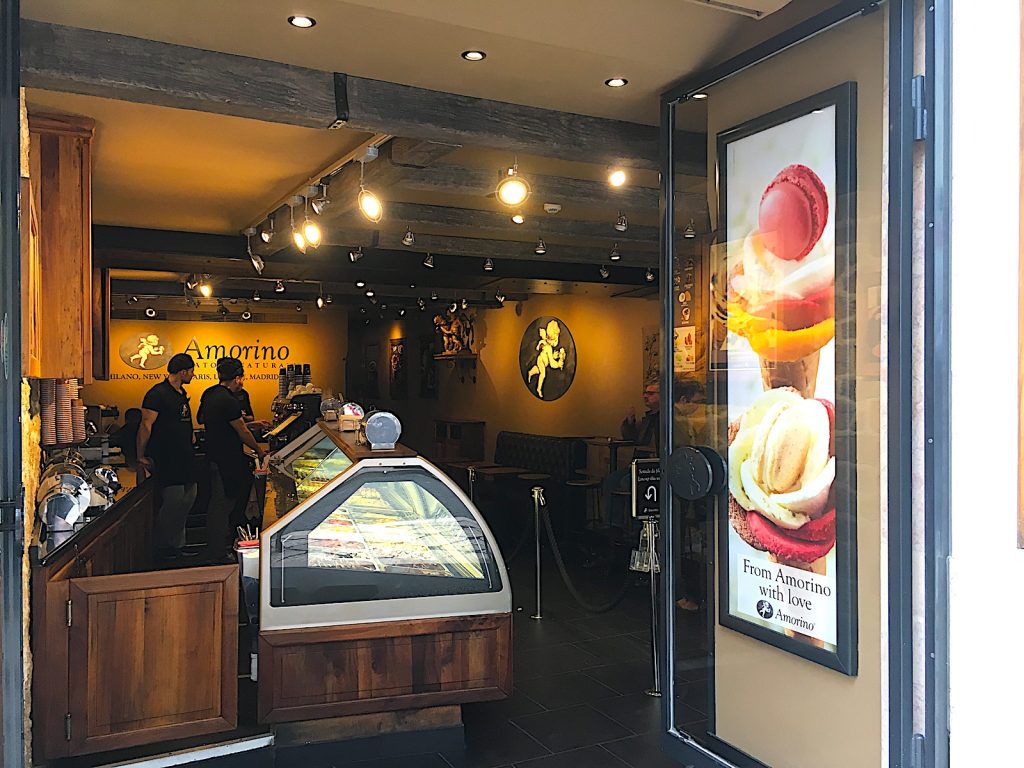 The ice cream shop: Amorino in Lisbon where you (when you take a cone) get the bulbs in the shape of rose petals. The artwork is beautiful to see, but the ice cream is far too good not to eat and only to look at the artwork. 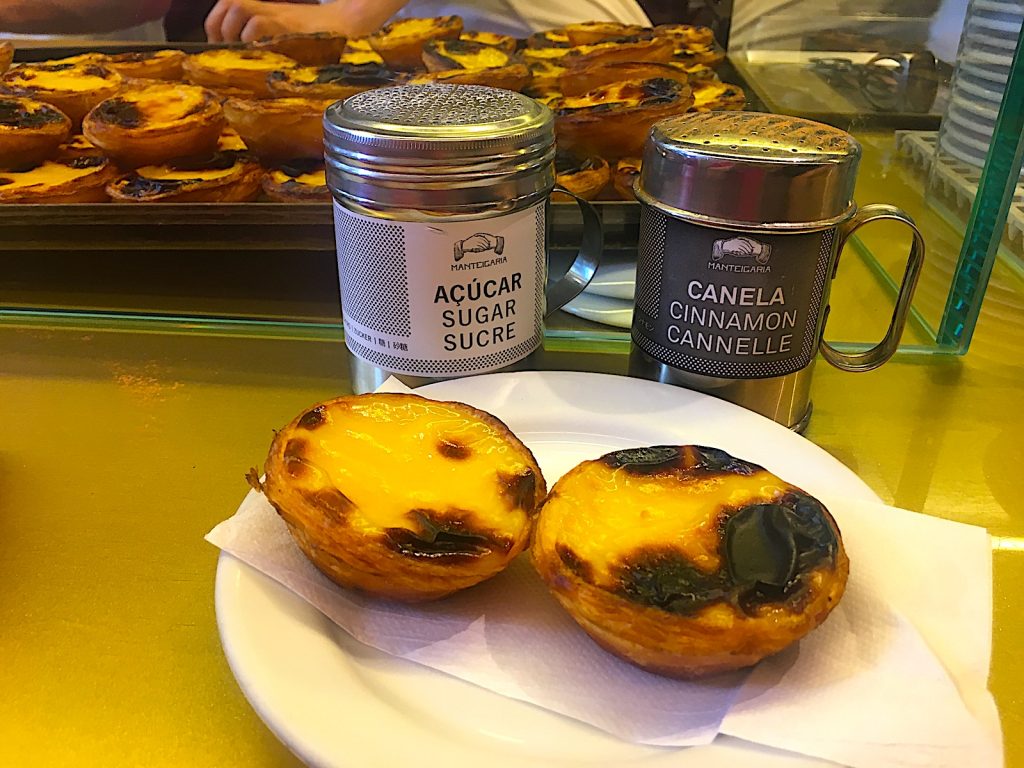 Manteigaria Fábrica de Pastéis de Nata is a charming little bakery where you can buy nothing but pastéis de nata (and of course a bica). 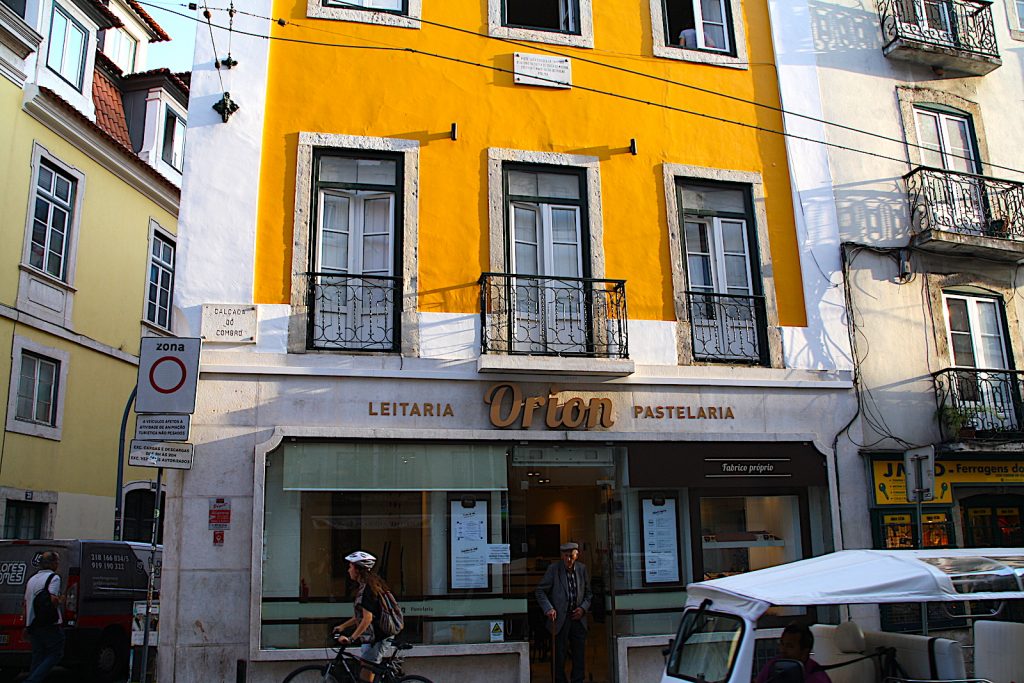 Pastelaria Orion is just around the corner from Ascensor da Bica on the busy road from the Chiado district towards Estrella. When you walk by and look inside you’ll usually only find locals there, enjoying all the culinary goodness Pastelaria Orion offers. 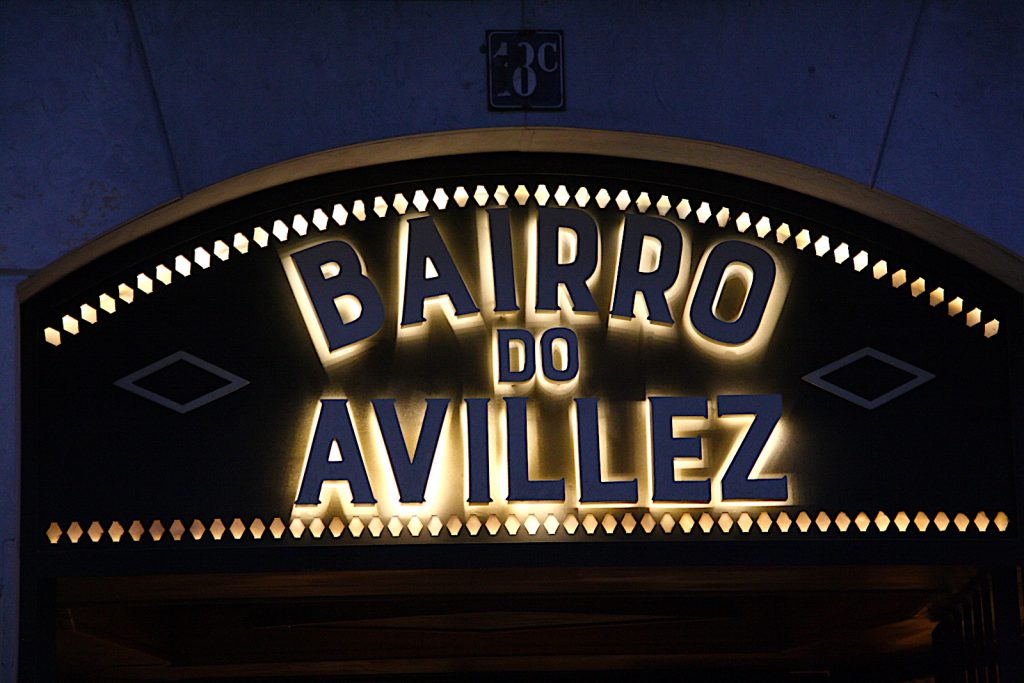 Bairro do Avillez is one of the newest hotspots located in Chiado and the most recent restaurants of famous chef José Avillez in Lisbon. Bairro Avillez has several dining options, of which Taberna is our favourite.

More about Bairro do Avillez »

Lx Center Chiado: At this guesthouse you can reserve a one, two, – or triple room with shared bathroom and kitchen. It is located in the heart of the Chiado and you are within 5 minutes walk to the attractions in the Bairro Alto or Chiado. An overnight stay costs 48 GBP. Boutique Chiado Suites: The rooms have a private bathroom with free toiletries. Some rooms have a balcony. The rooms have a fridge. An overnight stay costs 114 GBP. Lisboa Carmo Hotel: The hotel is located in the heart of the city. The upper floors of the hotel offer views of the Tagus River and Lisbon's Old Town. It is a 3-minute walk to the popular Bairro Alto district. One night is 175 GBP.

» More about other neighbourhoods in Lisbon»

Hidden in the more touristy area of Chiado, restaurant Popular Do Capelo is a typical Portuguese place where many locals come to eat. Don’t…

According to the Guinness Book of World Records, Livraria Bertrand Chiado is the oldest bookstore in the world. This place is an obligatory stop…

When we think of Pastelaria Alcôa, we don’t think of a traditional pastelaria with clattering coffee dishes and locals who order a bica en…

Bairro do Avillez is one of the newest hotspots located in Chiado and the most recent restaurants of famous chef José Avillez in Lisbon….

Pastelaria Orion is just around the corner from Ascensor da Bica on the busy road from the Chiado district towards Estrella. When you walk…

Portugal is of course best known for its excellent wines and all kinds of (often home-distilled) spirits. But the last years the craft beer…

Since May 2018 there is a new “rooftop” bar in Lisbon. And we love that! Drinks, views, relaxed atmosphere, so we had to visit…

Many times I walked past Igreja de São Roque, never really noticing this church. Why is that?! I don’t get it either. It’s a…

It’s not just Lisbon as a city that is experiencing some sort of second life. A lot of traditional Portuguese products are being marketed…

Sometimes you discover a store that is just dangerous to walk into. Ceramics shop Cerâmicas na Linha is such a place. The trick is…

Ice cream store Amorino describes herself best: Amorino is celebrating love with a gourmet touch. We are sold! Amorino has three different stores across…

Café A Brasileira is located between the Bairro Alto and Chiado districts. It’s one of the oldest cafes in Lisbon. In the old days…

In the middle of the city of Lisbon, between Chiado and Bairro Alto, you can find Convento do Carmo, the Carmo monastery. This impressive…

Manteigaria Fábrica de Pastéis de Nata has long been on my visit list, but somehow it never happened – either I’d just had lunch…

Make use of the trams and lifts in the city to be taken to higher parts of the city. Next to being an easy…

It is never too cold to eat ice cream! And besides, in Lisbon it’s never really cold. Gelados Santini is one of the best…

The cozy street Rua do Carmo is located in the center of Lisbon; from Rossio you walk uphill on this street to Rua Garrett….

We use cookies to ensure that your experience on our website is as good as possible. If you continue to use this website, we assume that you agree with this.Ok