Enjoying some sun while on the beach may not be the first thing you think about when you think of Lisbon. After all, Lisbon is usually your destination because of the city itself, with all its sights and tasty eateries. But you’d be mistaken. And you will miss out on a lot of beauty and, above all, tranquility.

To go to any of the beaches near Lisbon you’ll want public transport or a car. If you choose to explore the Costa Lisboa, it is best to do it by car. You will discover the beaches such as Praia da Adraga, Praia de Maças and Praia do Guincho, all three very popular with the locals, and less than an hour’s drive away form Lisbon!

Costa de Lisboa has beaches that consist of rocky bays, long sandy beaches and even some forests. This coastline is very diverse and extends over a long area, from Leiria in the north to Setúbal in the south.Between Cascais and Lisbon the sea is quite calm and the beaches are small (except Carcavelos). Beaches such as in Cascais, Estoril, Caxias are on the mouth of the Tagus river, rather than on the Atlantic Ocean, so the water is calm and there are just some small waves. 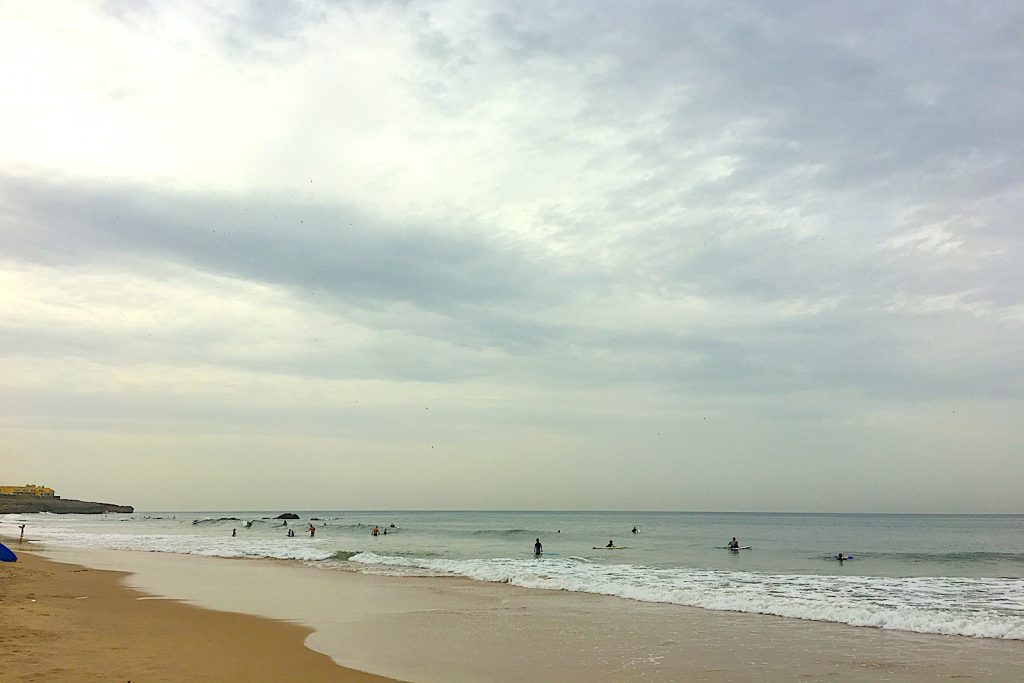 If you’re looking for rougher seas, go to an Atlantic beach. Especially at Praia do Guincho the sea can get quite high. Slightly less suitable swimmer’s beach, Praia do Guincho is very popular with surfers.

On the guarded beaches in Portugal they use a color system with flags.A red flag means danger, no swimming. Yellow means caution if you go into the sea. Green means that it is safe to go swimming. A white and blue checkered flag next to the flag means there’s temporarily no guard on duty.Most beaches between Lisbon and Cascais usually waive a green flag, the sea is calm and you can wade pretty far in the water. If you go into the sea on the Atlantic coast, look out for the strong winds and treacherous currents.

Topless sunbathing is allowed on most beaches, but on typical family beaches like Praia da Adraga it is not recommended. At Costa da Caparica and at Cascais beaches, walking around topless is more common.

Azenhas do Mar – Beach Between The Cliffs 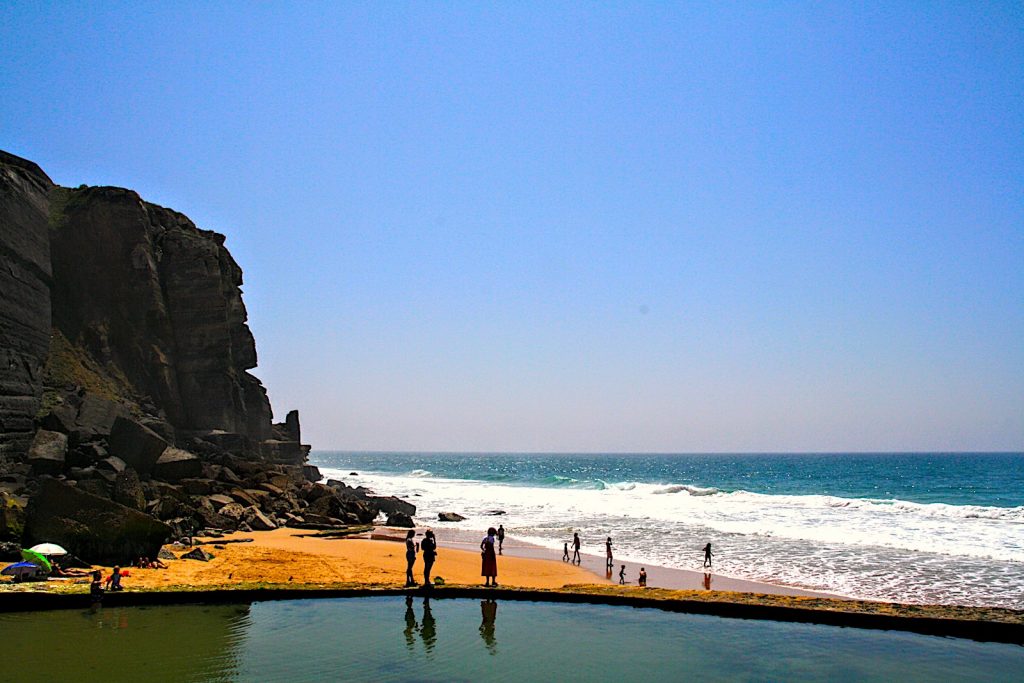 The beautiful village against the cliff with a very rough beach between the high rocks. It is one of the most beautiful places on the whole Costa de Lisbon. Definitely worth driving here with your car.

More about Azenhas do Mar » 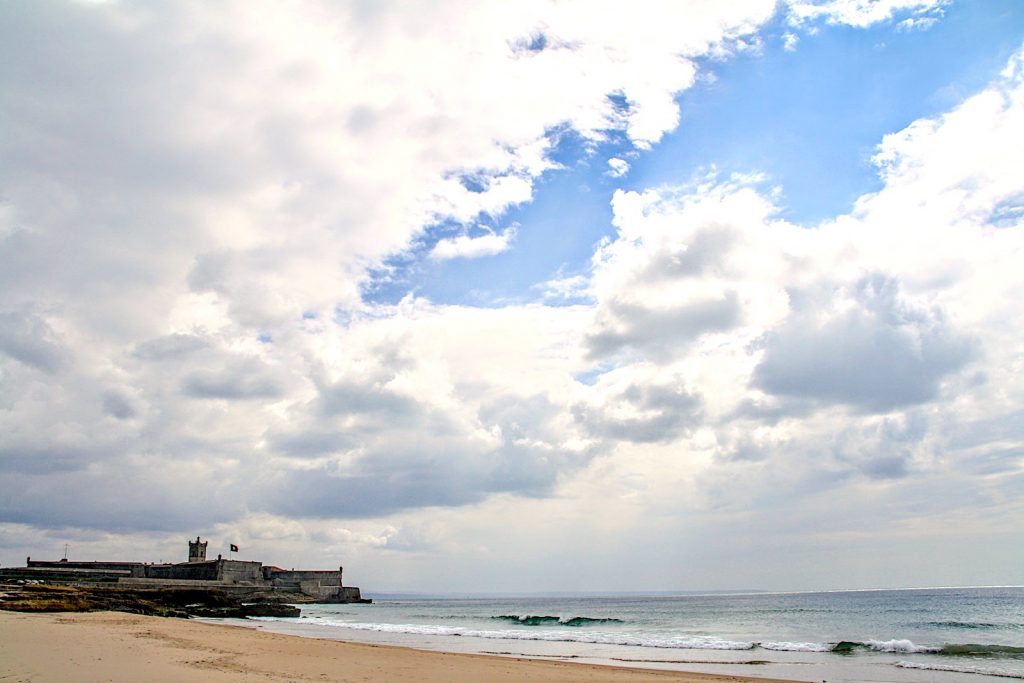 One of the most popular beaches, Carcavelos is especially attractive for the younger crowd. It’s a large and wide beach that is used by sunbathers, swimmers and surfers alike.The beach is 1.5 km long and the water is almost always clear. In the summer holidays and on weekends, this beach is completely full. There are good facilities at here. A large parking lot and a choice of restaurants. The beach is also easily accessible by public transport. A train to Carcavelos runs every 20 minutes from Cais do Sodré in Lisbon. From the station it’s a 10 minute walk. 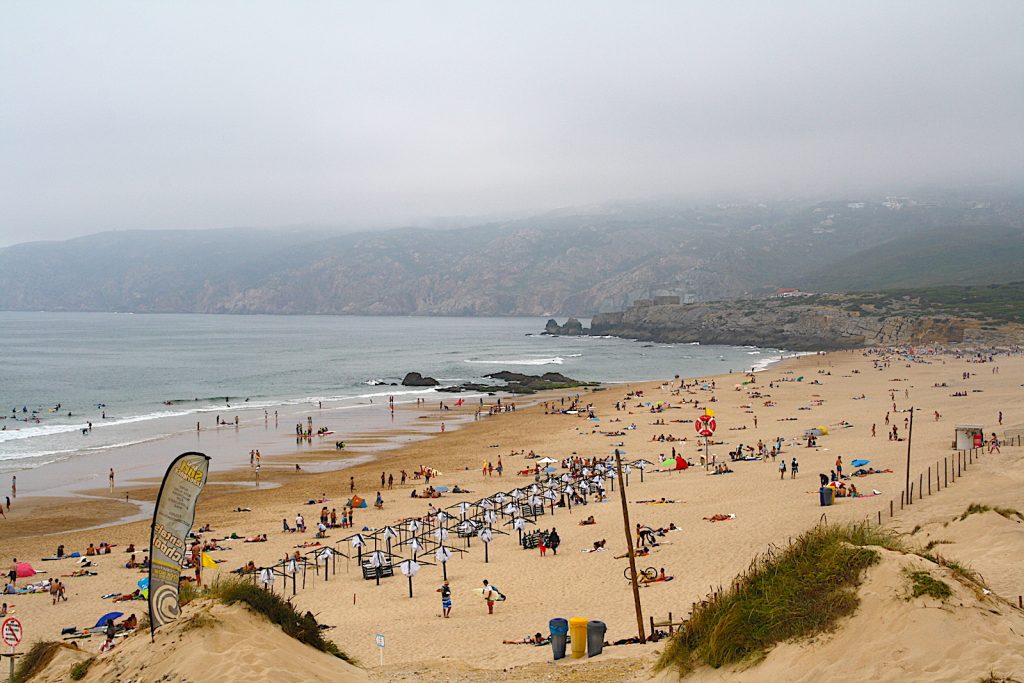 Guincho is a real surfers beach. Thanks to the towering waves here, there are many surf events. Besides surfing, the beach is also a must for hikers and hungry people.

More about Praia do Guincho »


Costa da Caparica – For Everyone 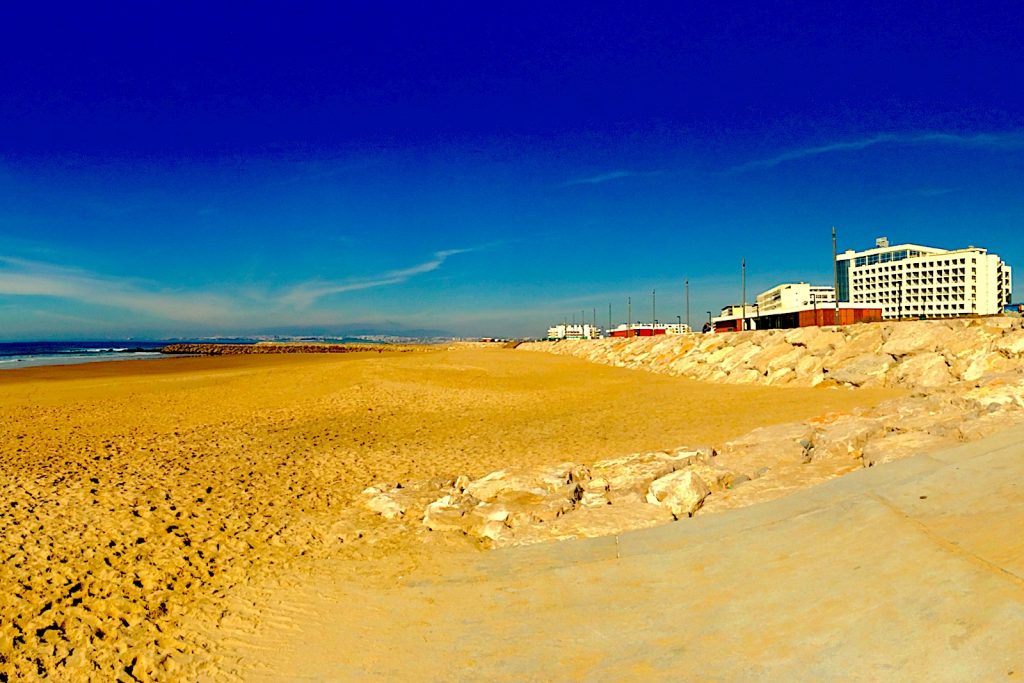 The summer mecca of Lisbon! Get ready for some refreshment, sea, beach and entertainment, take the bus to Costa da Caparica.


Praia Grande – See And Be Seen 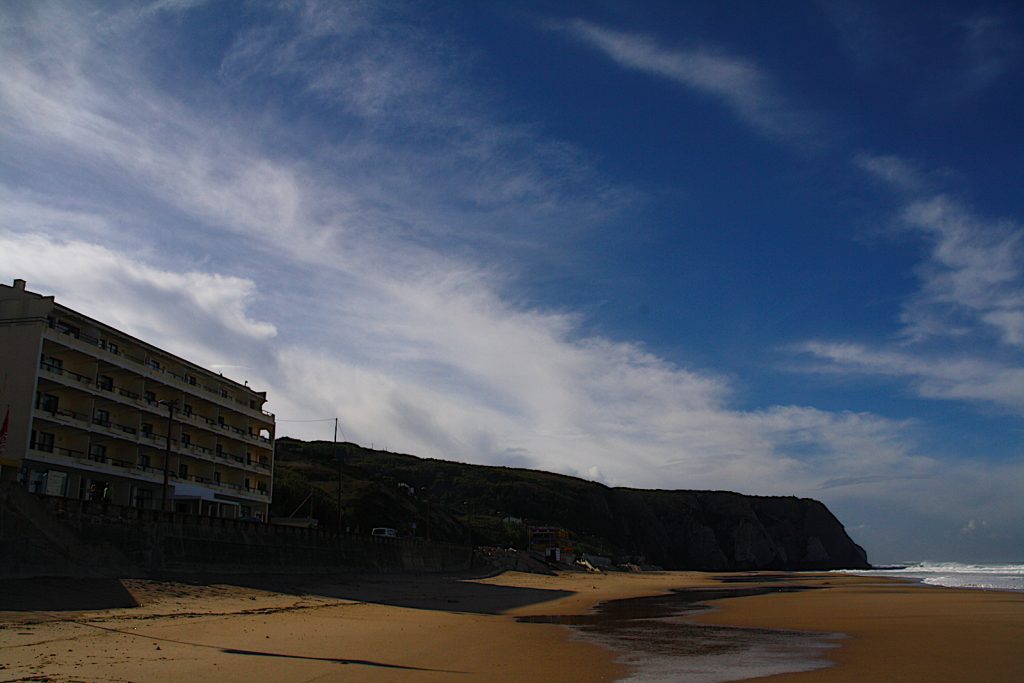 Very popular among young people who like to do some surfing.. The beach is the one of the largest of Costa de Lisboa. 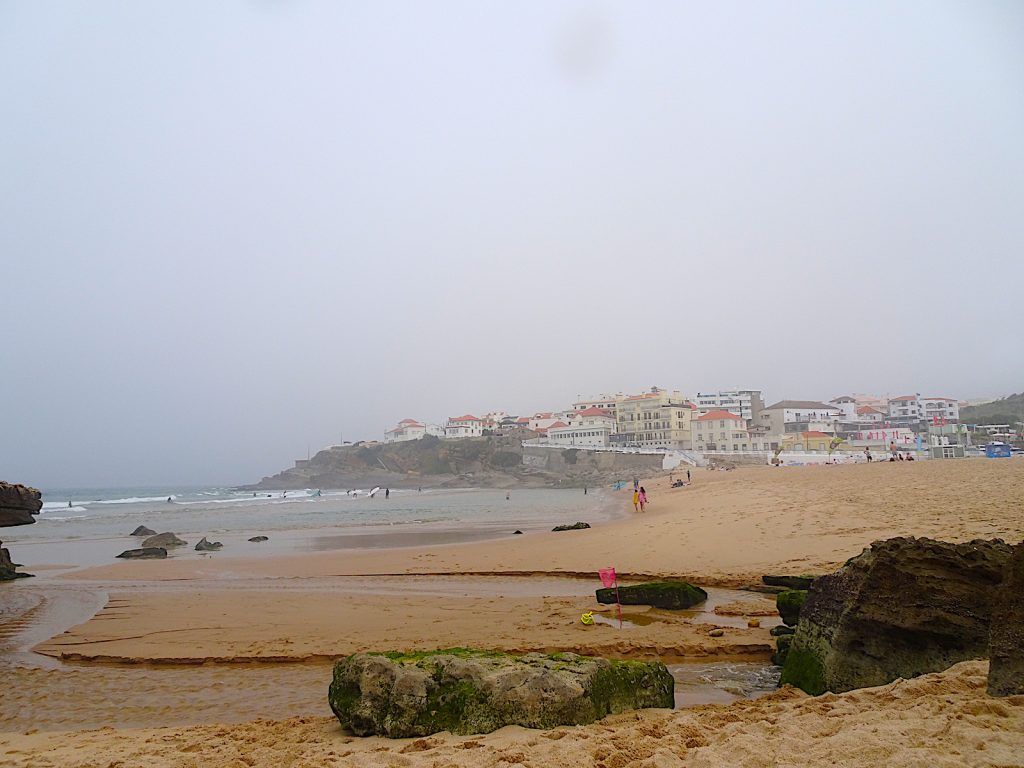 Ths beach is directly adjacent to the village where you’ll find a choice of little places to get something to eat. Praia da Maçãs is very child-friendly, with its calm water and lots of sand. 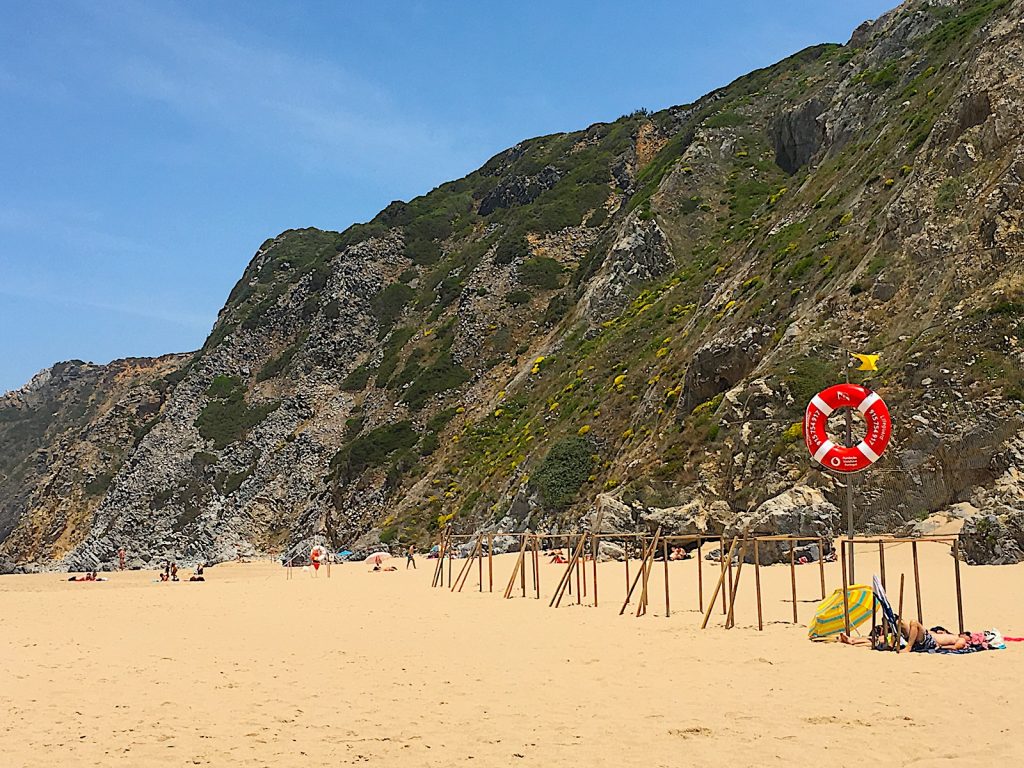 Insider tip from locals: this is a real family beach where you can cool down between the cliffs and the rough sea. Fancy a walk? At low tide you can also reach the sea caves. 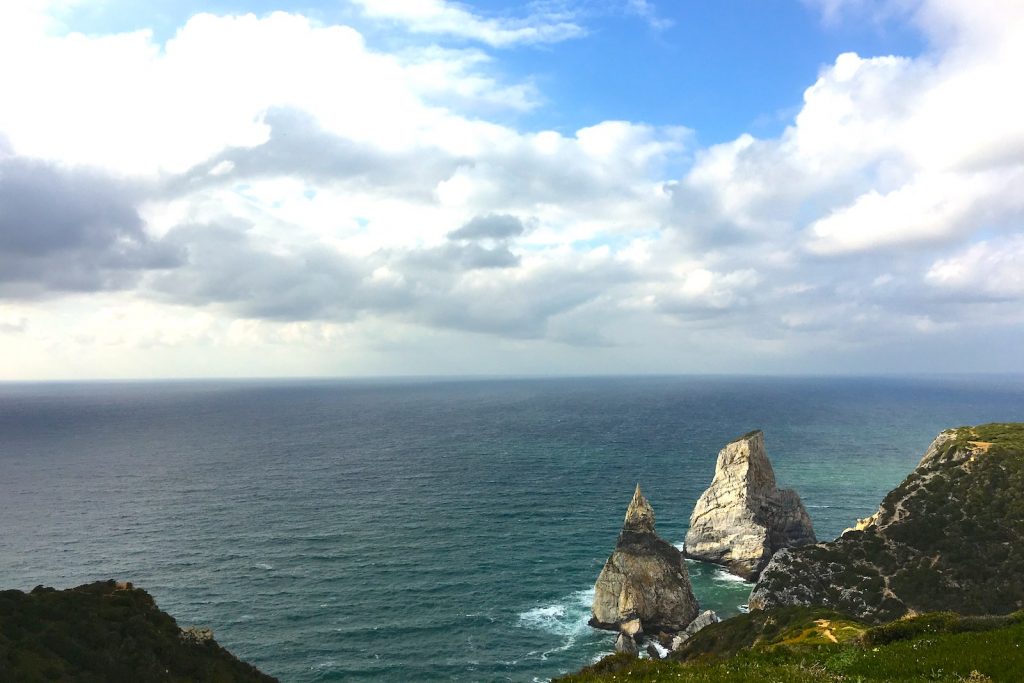 Small but beautiful beach between the rocks. Close to Cabo da Roca. Turn right in the middle of the road and on to the dirt road. There is a parking lot after a few hundred meters. From there it is about a half kilometer hike down, over a difficult but walkable path.

Praia do Magoito – Popular bay in the sea 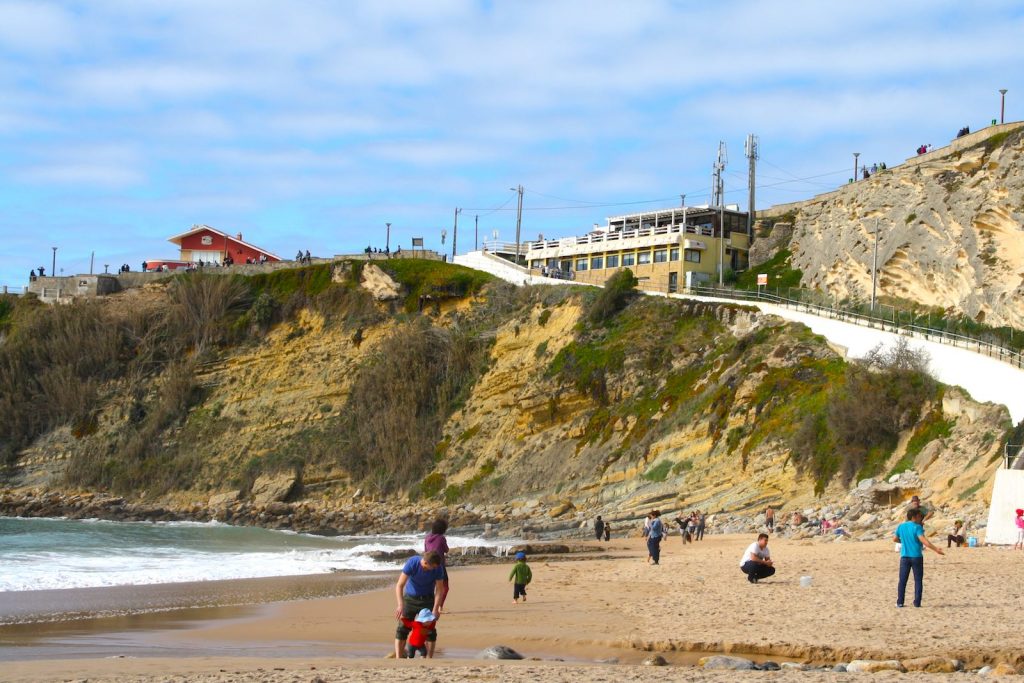 Near the small town of Magoito is a beautiful beach with impressive rock formations in the background. This beach is very popular with locals who will spend the whole day here in the summer.

More about Praia do Magoito »


Cascais – Beach in the city

Cascais is an old fishing village on the Tagus River with two beautiful city beaches where locals come to cool off on hot days.

More about beaches near Cascais »

40 kilometers south of Lisbon, in the Natural Park Serra da Arrabida Natural Park, lies the nudist beach Meco. It is one of the cleanest beaches in Lisbon, with high cliffs and a beautiful view of the bay. The beach became popular during the seventies as one of the first nudist beaches. The secluded beach still has this reputation and many European nudists visit it every year.Don’t fancy to walk around naked? There are also parts on the beach where you can keep your trunks or bikini on. This is also the part where you’ll find most families. The location is at a traditional fishing village. It has a number of bus lines, from Praça de Espanha to Sesimbra to Santana, eventually arriving at Meco village.

At a stone’s throw from the Atlantic Ocean at Praia das Maçãs you will find Tap Room Hops & Drops. This craft beer place…

The largest beach of Cascais is Praia da Conceição and from Lisbon you can be there by train in less than 40 minutes. When…

Traveling from Sintra to Praia das Maças by tram is a wonderful tourist attraction. Do take time because a ride with this 100 year…

The skyline of Azenhas do Mar is one of the most famous images of the Portuguese west coast. The waves hitting the rugged coast,…

About 19 miles west of Lisbon you’ll find the town of Cascais. In the past, Cascais was a small fishing town, traces of which…

In less than 30 minutes from Lisbon you can be at the beach at Costa de Caparica. To get to this beach you will…

Praia Grande is one of the largest beaches on the Costa de Lisboa, as the name suggests. The beach is located on the west…

This beautiful beach should not be missed if you decide to drive out of than Lisbon. At less than 45 minutes drive, just north…

Praia das Maçãs literally means “beach of apples”. The beach got that name because the Ribeira de Colares (Colares river) used to flow into…

In less than 45 minutes, at about 27 miles from Lisbon, you can reach the most beautiful beach in Portugal, perhaps in Western Europe:…

Praia do Guincho is considered to be the roughest beach of the Costa de Lisboa, known by many surfers as the surf beach of…